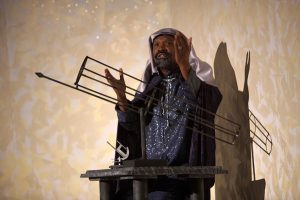 Just another night in Bethlehem? So think two Roman guards stationed there on the night of Christ’s birth. Bored with their mundane existence, the guards thirst for excitement, and are astonished when their wish appears to be granted with the arrival of three astrologers from the east. Suddenly the guards are embroiled in mysterious prophecies of a new king, born under a strange star, as the astrologers foreshadow the bloody role the guards are about to play in the service of an enraged king. A reinterpretation of a biblical tale that crackles with humor and suspense.