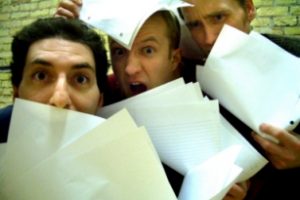 As three writers struggle toward collaboration, all of their worst ideas spring to life on the empty stage. Beginning with the sudden appearance of the demanding audience, the authors are thrust into the middle of their own unfinished works. Ernie finds himself hunted by Nick Nitro, action hero, who takes Ernie for his arch-nemesis, while James throws himself a little too deeply into the part of hard-boiled private eye Danny Stone and his relationship with the seductive Natasha. Meanwhile, Milton struggles with his own internal demons as his character Elliot demands a reason for the crippling disability Milton has written into him. Dissatisfied with Milton’s highbrow rationales for his suffering, Elliot weaves the stories together in an effort to control his own, and the three writers find their lives hijacked by the hilarious nightmares of their own imaginations.